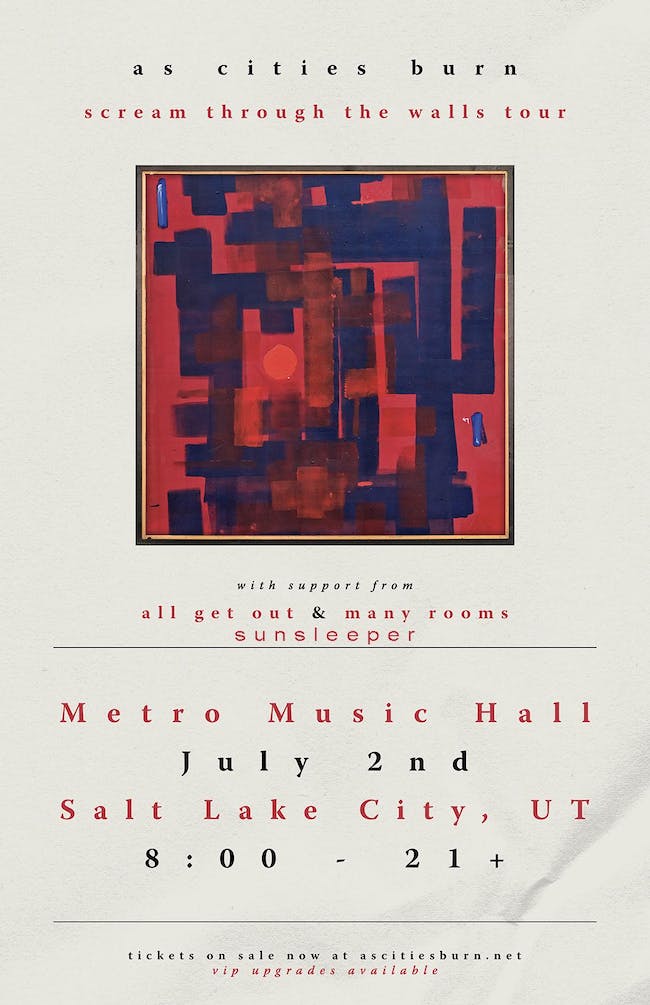 All Get Out, Many Rooms, Sunsleeper

Since their inception in 2002, As Cities Burn have garnered tremendous respect for their progressive take on the post-hardcore genre. Upon the release of their 2005 full-length debut, Son, I Loved You At Your Darkest, fans and critics alike fell in love with the balanced dynamic of TJ Bonnette’s visceral screams and the clean vocals of his brother, Cody, who also serves as the primary songwriter in the band. In 2006, TJ’s new marriage saw him leave As Cities Burn for a new life in Mississippi. The remaining members forged ahead, undergoing several lineup and stylistic changes over the next three years and releasing two more acclaimed full lengths - Come Now Sleep (2007) and Hell or High Water (2009) - before disbanding in 2009.

This, however, is not where their story ends.

In the time since, As Cities Burn would occasionally play one-off shows, but no plans for a proper reunion were discussed until a few years ago when TJ moved to Nashville where his brother and the rest of the band were living. Casual jam sessions commenced and, before long, a concrete plan fo a new record began to take shape. Two years later, As Cities Burn are ready to unveil Scream Through The Walls - their first album in ten years and the first with the Bonnette brothers collaborating since the band’s seminal debut.

On Scream Through The Walls, As Cities Burn turned to a familiar collaborator in producer Matt Goldman (Underoath, Meg & Dia, The Chariot) to help capture the signature frenetic energy of their live show. Goldman proved a wise decision, providing sonic clarity without sacrificing the rawness and honesty the band wanted to instill in the record. While this was the band’s most collaborative record to date, primary songwriting duties remained with Cody and his personal growth since the last record shines through on how progressive and open the album is lyrically. It deals with the destructive tendencies and emotional crutches we rely on, both on a personal level and from a larger cultural perspective. The album title, which comes from the lyrics to album cut “Hollowed Out”, deals directly with Cody’s own bouts of debilitating depression and self-imposed isolation. The actual lyric “scream through the walls” is a reminder that most of us are suffering and urges everyone, including Cody, to move to the mental space adjacent to your loved ones so you can at least help each other through the barriers you erect when in your darkest moments.

On a macro level, Scream Through The Walls applies the symbolism of those walls alluded to in “Hollowed Out” to the destructive path society is barrelling down as a result of our reliance on technology. It’s an examination of the way people are cutting themselves off from their neighbors in order to fit neatly into whatever persona they want to portray with their digital presence. As a result of this smartphone-induced, divisive behavior, the grey areas where people of different cultures and beliefs used to find common ground are being destroyed. Still, despite the dystopian views expressed, this album also seeks to offer a glimpse at how we can correct our course. As Cody puts it, the ten tracks on Scream Through The Walls seek to be “like a good counselor, asking the right questions to allow the listener to work through their issues on their own terms”. If “2020 AD” paints the most vivid picture of what TJ describes as “our cellphones as a puppeteer, the devil or a deceiver”, “Bright White Light” best exemplifies the longing for a purer existence as it poses the question of whether or not we’ve gone too far down the wrong path. “Chains” then returns us to the intimacy of “Hollowed Out” as it asks “how far are you are willing to go and who you are willing to hurt to get ahead?” to the listener. If one were to look at the summation of our answers to “Chains”, they might get a better feeling for what the answer to the question at the core of “Bright White Light” might be.

Scream Through The Walls emphasizes our freedom to make our own way and the need to accept that everyone’s path is different. The band has never shied away from their own faith, but sees no reason to impose their beliefs on anyone else. Everyone must determine on their own what helps them to be their best self and Scream Through The Walls is constructed to be a unique experience for each listener, no matter what their personal journey entails. On this record, the band has struck the perfect balance of intimate revelations and universal relatability. When it is released June 7th on Equal Vision Records, there is a very good chance it will end up being one of the most important heavy rock albums of 2019.